A Gift of a Day 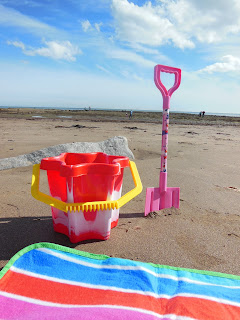 Sometimes, life sends you a beautiful gift of a day, one that will be remembered for a long time to come, and recently we had such a day down by the sea at Robin Hood's Bay.

This little village is a cluster of old fishermen's cottages on the Yorkshire coast, which shelve steeply down to the slipway and beach.  Great cliffs sweep away to the left, and to the right, when the tide is out, the beach curves away in a crescent of sand covered with slippery rocks and enticing pools.

We parked at the top of the village and began our descent down, stopping at the little grocery/post office to buy drinks and chocolate bars.  Once there we set up our camp and immediately kicked off our shoes.  The little one was away with her net and bucket in an instant, off to catch shrimps and crabs. 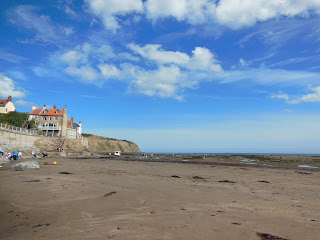 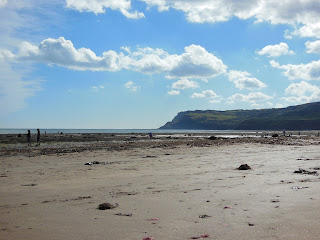 It was a spectacular day, with blue skies and warm sunshine.  The good weather had enticed quite a few people down to the sands as well as an ice-cream van who had parked at the bottom of the slipway.
There is a wonderful tranquillity about this place.  You slowly become aware of the peace as there is no sound of traffic, only the gentle breeze soughing in the trees and the cry of the gulls overhead.  Even the sea was peaceful, as still as a millpond and streaked with jade, indigo and blue.

The day passed in a gentle and carefree way, searching the rock pools for creatures, making sand pies and eating delicious ice-creams.  It was unanimously decided that fish and chips on the beach for tea was quite essential.

Later that afternoon, we had a wander up to our favourite café, Swell, and had a refreshing drink sat on the veranda overlooking the wide sweep of the bay.  It's quite something!  As we left, we bought some special treats from the glass cabinet for our dessert later on - chocolate crispy crunch slices for us, and for the little one, a rich chocolate brownie. 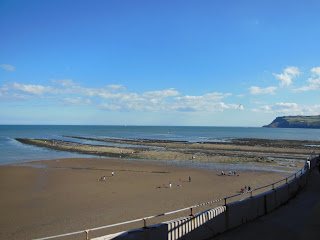 After our refreshments, we wandered around the village a while... 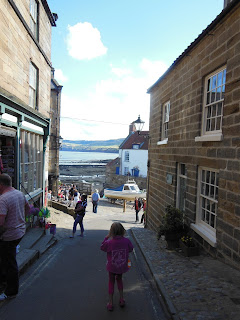 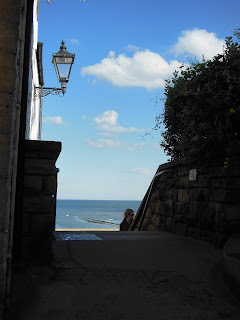 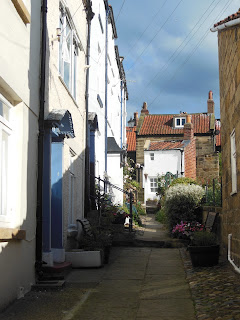 There is something heavenly tantalising about catching a glimpse of the sea between buildings, that happy inducing blue stripe makes the heart soar, like discovering treasure I think!  There are also exciting little lanes and pathways to be found, lined with higgledy piggledy cottages that were frothing over with bright blooms in baskets and containers.  And it is up one of these very paths, hidden up a side lane down by the dock that you will discover a very good fish and chip shop.  Tempted in by the mouth watering scent, we promptly went in and ordered and then took the steaming parcels down on the beach.  Really, it's quite the best place to eat them I think! 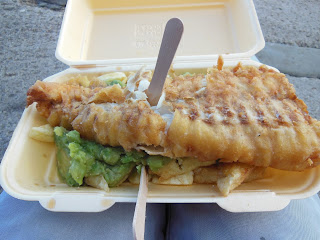 There's absolutely nothing better than fish and chips, soaked in salt and vinegar, eaten at the seaside.  and with a view like this it was nothing short of perfect. 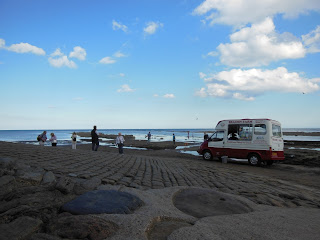 After our fish and chips, we sat a while watching the tide coming in.  It crept in quietly yet at a rather alarming pace, filling rock pools and coming right up the beach.  People, seemingly drawn by the change in energy began to wander down to the sands to enjoy the last moments of this beautiful day.  Gathering in groups, standing together and talking in low voices the sun slowly sank behind the sands and there was a quiet calm the likes I've not experienced before...it was almost as if people were wistfully saying farewell to Summer, knowing that this gift of a day was something very special and that ahead lay colder days. 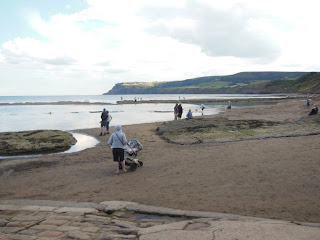 One last walk along the beach then, before it was time to head for home... 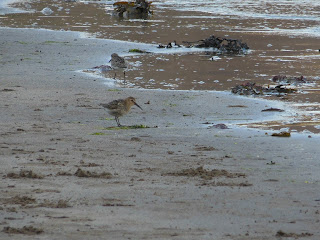 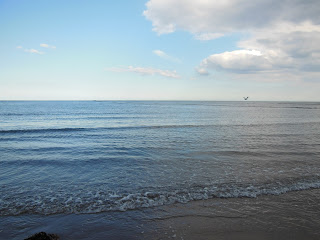 Goodbye for now, my favourite village on the cliffs... 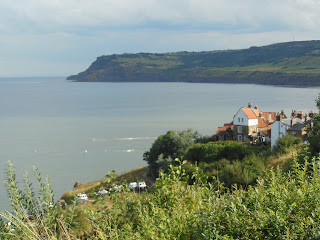 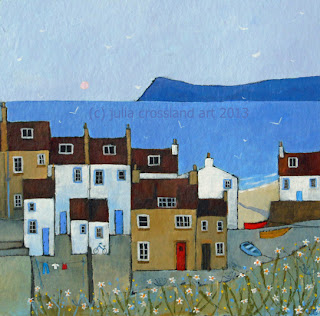 Inspired by the village of Robin Hood's Bay, this framed painting, entitled 'Slipway' is now available to purchase.  Please contact me for more details if you're interested. 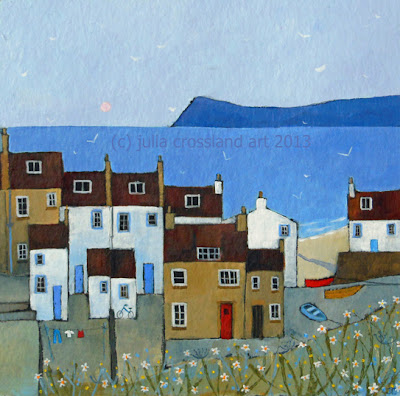 ﻿
School has started again, after a long, hot and languorous Summer holiday.

I am all of a sudden alone in an empty house, there are lots of things to do, things to be cleaned and tidied but right now, I am aware of a silence and a stillness that wasn't there before, and I'm taking my time to acclimatise to it.
In a way, I had dreaded this day arriving, but it wasn't as bad as I imagined.  There's plenty to do today as it happens, little chores to fill the little gaps, to keep me occupied.  In an hour or so the house will ring with the sound of her little being again as she clatters in through the front door, throws her school bag on the sofa and runs outside to play.
September to me feels a little bit like a January; a time of fresh beginnings, new projects and so forth.  I'm in the throes of planning a Market Night which will be hosted on my Facebook Page, where I'll be selling some brand new, fresh original art!  There'll also be some new art products that I'll be sharing with my newsletter subscribers very soon - you can sign up for yours here. 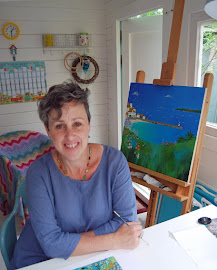 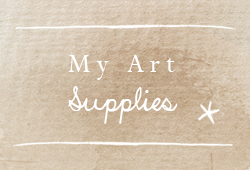 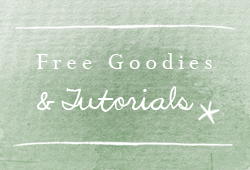 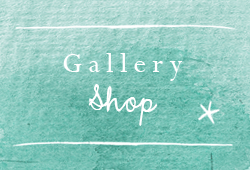 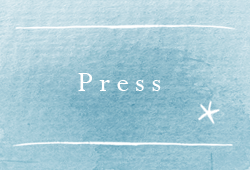 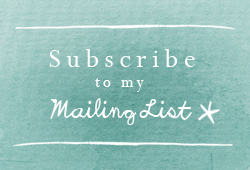 All words and images on this Blog (unless otherwise stated) are Copyright to Julia Crossland. I'm over the moon if you are inspired by my Blog, and if you wish to use any of the images or content here I ask that you please drop me a line at enquiries@juliacrossland.co.uk. Thank you kindly.